The second largest island in the Mediterranean, Sardinia is a favourite holiday destination, not only for the beauty of the coastal resorts but also for the fascinating historical ruins, the beautiful mountainous scenery and the warmth of its people. Read more on the travel guide to Sardinia below.

Long stretches of rocky coastline dotted with secluded bays are interrupted by long white sandy beaches with crystalline waters. The playground of the rich and famous, the Emerald Coast is famous the world over for the luxury hotels, the lively nightlife and the beauty of the surroundings. However there is more to Sardinia than just sea and sun, the luscious green sceneries of the mountainous inner parts are a favourite among nature lovers who can follow the foot trails into unspoilt territory where it is still possible to admire rare species of fauna.

The mild climate make it a popular destination all year round with peaks during the summer season when the island populates with beachgoers making July and August rather crowded months.

Sardinia is at its best in June and September when the weather is warm enough, but not unbearable and the atmosphere is lively but not exceedingly touristy. Sardinia is a fantastic place for water sports such as windsurfing, kite-surfing, surfing, snorkelling and sub-aqua diving as well as other outdoor activities such as bird-watching, golf, trekking, mountain-biking and rock-climbing.

If you like to visit more than just one area, it would be useful to hire a car as public transport is not reliable, the island is in fact larger than people may think and it is not possible to cover all of it in just one week, but with careful planning you can see all the places that interest you.

Food in Sardinia today is very different, from the coastal areas to the inner parts of the island where the ancient food traditions have retained the real Sardinian flavours based on locally grown produce and locally sourced meats.

Coastal towns instead tend to consume a lot of fish normally grilled but also cooked in more elaborate recipes with the use of local herbs and wines. Alghero for example boasts some fine recipes such as lobster Catalana, lobster salad with tomato and onions, and “Spaghetti Bogamari” spaghetti served with sea urchins. During sea urchin season, starting around January time through to March, piles of sea urchins are available for sale, still in their prickly shells, directly from fishermen who set up their stalls all along the waterfront. A typical Sardinian meal is based on grilled meat, primarily baby lamb or suckling pig, but also game and wild boar. Starters usually include cold meats, homemade sausages, hams and salami, olives, a large variety of cheeses and other farm produce.

First courses are usually homemade pasta recipes, such as “malloreddus a sa Campidanesa”, Sardinian gnocchetti with sausage and cheese ragout, or “culungiones”, cheese or ricotta filled ravioli. Apart from boasting a large variety of breads and cakes, Sardinia is a great producer of honey. There are many varieties according to the type of flower bees are farmed on.

Sardinia is fast becoming recognised as a producer of some of the finest wines in the world. Thanks to international interest many of these wines are now readily available outside Sardinia. The climate and fertile soil combined with the continued use of traditional techniques are the key to the wines of Sardinia. Among the better known are the Sella & Mosca wines, Vermentino di Gallura, Malvasia from Bosa, Rocca Rubia from Santadi, Carignano del Sulcis and the award winner Terre Brune.

Fortified wines such as Vernaccia di Oristano make a lovely aperitif and the famous Mirto, a blackcurrant liqueur is a fine digestive after a heavy traditional lunch.

Sardinia’s main attraction is certainly the sea with a beautifully diverse coastline of rocky cliffs, hidden inlets and long stretches of very fine white sand. The crystalline water, the sunshine and the wild vegetation make Sardinia a paradise island in the Med.

A seaside destination, Sardinia offers all types of water sports from diving and snorkelling to windsurfing, surfing, kite-surfing and sailing.

You can choose the northern coast from Santa Teresa di Gallura to Castelsardo known as Paradise Coast, or Stintino located on the northwest coast with some of the most beautiful beaches in Sardinia such as La Pelosa and La Pelosetta as well as the rocky Capo Falcone, which is an ideal spot for snorkeling and diving.

The west coast around the charming Catalan town of Alghero is famous for its coral and diving in this area is very popular with many facilities at hand all year round. The very famous emerald coast is situated on the east coast and runs from Olbia and Arzachena to Golfo Aranci. Playground to the rich and famous, favourite spots on this part of Sardinia are Porto Cervo and Porto Rotondo. Driving down from the emerald coast are many fantastic destinations such as San Teodoro, Cala Gonone, Orosei, Arbatax, Muravera and Villasimius.

In the beautiful southern coast visit Chia, Nora, Teulada and the islands of Sant’Antioco and Carloforte. 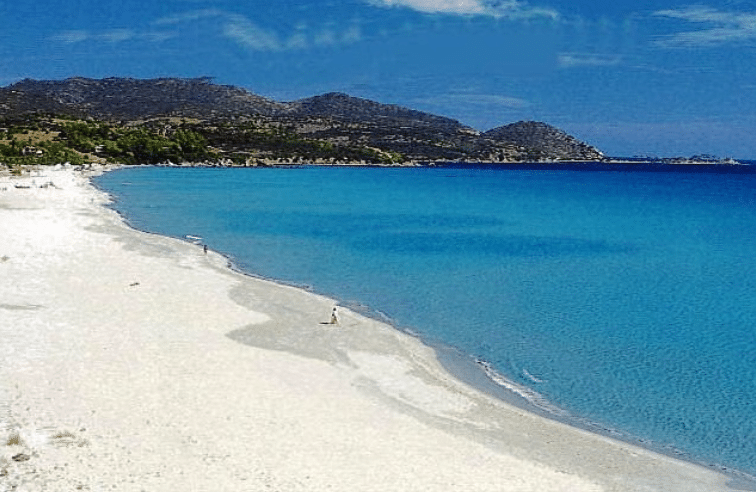 Sardinia is not only about sunshine and seaside, the inland territory is just as fascinating, in particular the Ogliastra and Barbagia regions with the mountain ranges of the Supramonte and the Gennargentu. This amazing unspoiled territory with amazing views is the ideal destination for the nature lovers who can take long walks following the mountain trails, enjoy excursions on horseback or organized outings on quad bikes or 4 wheels off-road drives.

The territory in this part of Sardinia can be quite rough and it is advisable not to venture on difficult excursions without a local guide. An unusual and fascinating way to visit the Ogliastra region is by the Sardinian railway Trenino Verde (Green Train), a narrow-gauge line that climbs up to the mountains through the woods and forests and then goes down to the Arbatax shore. 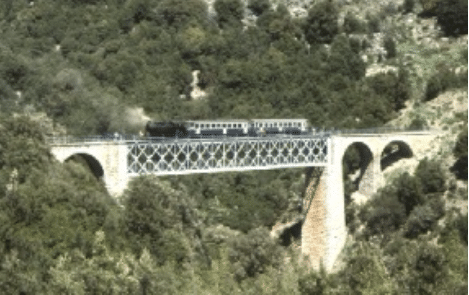 There are various routes available with stopping off for mountain walks and a typical lunch at one of the many working farms known as agriturismos. The Ogliastra’s coastline, an alternating of vertical cliffs, inlets, bays with tiny candid pebbles and beaches with really fine sand is the ideal place for free climbing, which attracts some of the biggest names in the sport.

Finally the ancient history of Sardinia with the many civilisations through the centuries have left a large heritage of ruins scattered all over the territory, particularly famous are the nuraghes, a typically Sardinian form of architecture of cone shaped dry stone constructions. Some of the best examples are Su Nuraxi in Barumini and Nuraghe Losa in Abbasanta. 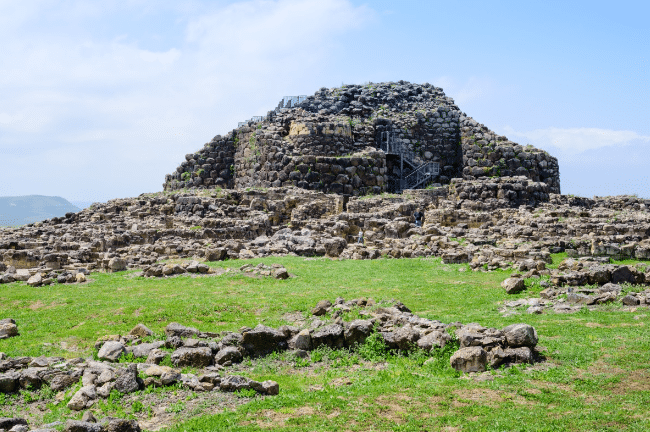 The Phoenician ruins of Tharros with remnants of ancient buildings and roads overlooking the sea close to Oristano are well worth a visit. Plan your visit for late afternoon and you’ll enjoy the most amazing sunset giving the area a somewhat mystic atmosphere.

The National Archaeological Museum in Cagliari

The museum gathers materials from all over Sardinia.

The Archaeological Museum in Sant’Antioco (province of Cagliari)

The museum hosts mostly materials from the archaeological excavations in Sant’Antiaco, findings from the necropolis, the tophet, and from an area called “Chronicles” in the centre of Sant’Antioco that has only recently been explored.

The Archaeological Museum in Pula (province of Cagliari)

The museum gathers material from the archaeological site of Nora.

The “G.A. Sanna” Archaeological and National Museum in Sassari

The Museum exhibits archaeological material from all over Sardinia, and particularly from the province of Sassari; it also has a picture-gallery and an ethnographic section.

The museum houses the finds from the excavations of the city and the necropolis of Turris Libisonis.

The Museum was opened after the important discovery of a Roman cargo ship that was wrecked just before the island of Spargi in II B.C. and covers underwater archaeology.

This museum gathers material from various private collections, they are mainly finds from the Sinis peninsula (Tharros) and from the prehistoric sites around the lagoon of Cabras.

The Menhir Museum in Laconi (province of Nuoro)

The museum hosts about forty Chalcolithic menhir that were found in the territory of Laconi in the last twenty years.

This airport, located on the northeast coast offers National and International connections.

There is a network of buses and a railway line connecting the north of Sardinia with the South, but the service is not always reliable and is generally quite slow. Taxis are available, but are very expensive.

The best way to move around the island is by hired car, there are many companies to choose from at competitive prices.